Aqua Pacific® Natural Mineral Water begins its journey as precipitation in the remote mountains and hillsides of Nadi Highlands. Over several centuries the water filters through miles of prehistoric volcanic filters eventually accumulating in an underground "aquifer".

An aquifer can be described as an underground reservoir. An "artesian" well is sourced from an aquifer that is literally completely enclosed and pressurized. The water that feeds it seeps in through small crevices and channels and when tapped this pressure will actually force it up to the surface under its own power or with limited pumping.

This is the type of water source that accurately describes what the world now knows as Aqua Pacific® Natural Mineral Water. Once the water is tapped, it is filtered to eliminate any particles above .2 microns (5 times smaller than the industry standard of 1 micron) and then it is ozonated to avoid chemical sterilization before bottling.

Aqua Pacific® is then transported to one of many international destinations that regularly drink our refreshing and replenishing beverage.

Aqua Pacific® is bottled in PET plastic bottles and follows a trend towards greater eco-friendly production by utilizing a squarer bottle which increase efficiencies in transportation, fuel costs and recycling.

It is generally shipped overseas in 20’ containers and arrives at distribution outlets for retailing. We do offer online purchasing for those discerning citizens of the world who have not yet found easy access to our premium water in a local retailer.

We are also rapidly moving our distribution channels into the far reaches of the world as we hope to someday provide to all the world convenient access to the "Smooth Tropical Taste of Fiji" of Aqua Pacific® Natural Mineral Water. 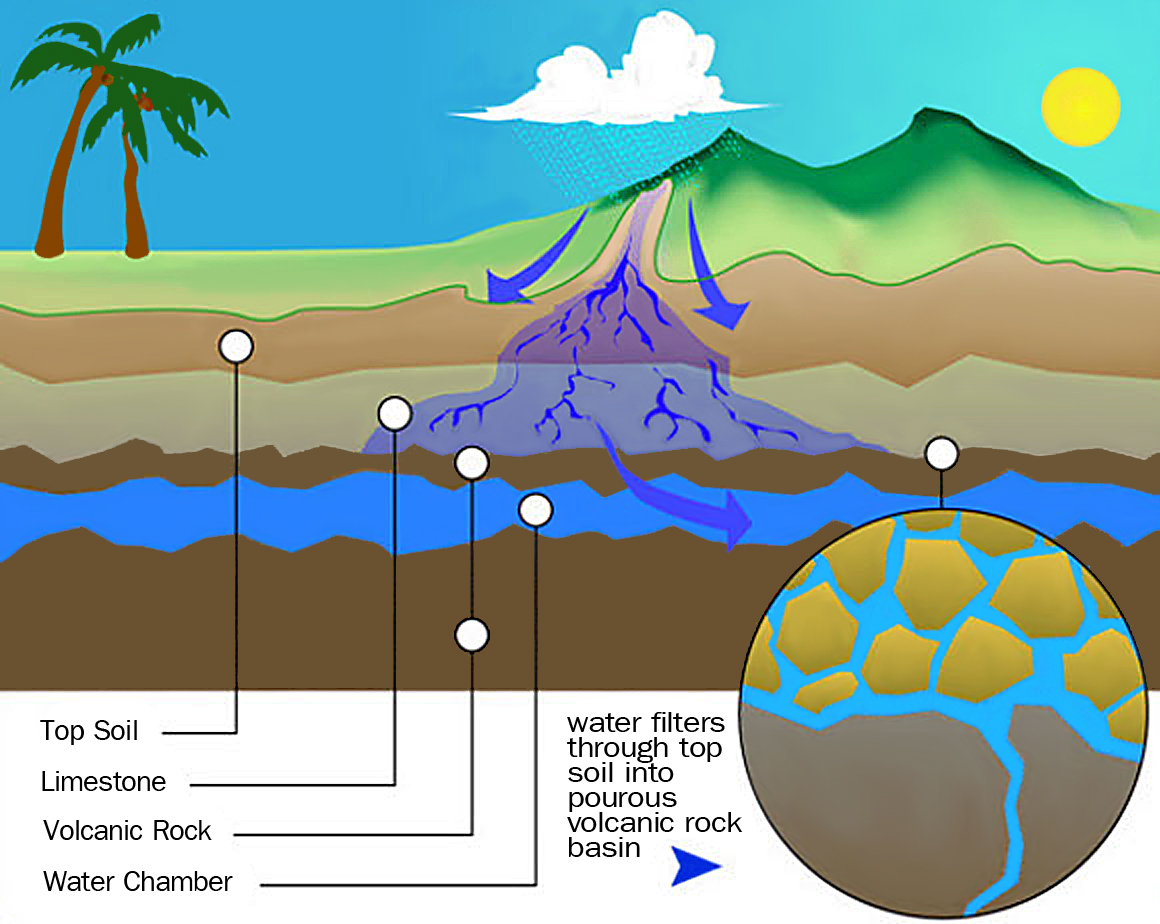 One of our most valuable resources is the water beneath our feet - often you cannot see it and you may not even know that it is there! Certainly below sea level, most of the void spaces in the rocks below are filled with water.

But rocks all have different characteristics of permeability and porosity. This means that water does not move around the same way in all rocks.

Imagine if all the water that fell onto Fiji in a single year stayed right where it landed. Here in these tropical islands we would be swimming in water almost up to our necks! Lucky for us the precipitation will run into streams and rivers, into the ocean, or into underground storage areas called aquifers. An aquifer is an underground reservoir. The water that reaches these holding areas is generally much purer than the water of reservoirs at the earth's surface. Almost no bacteria live in aquifers.

Most if not all pollutants will be filtered out as the water passes through the soil, and in our case, prehistoric volcanic filters on its way to the aquifer. Fortunately, there is no silty mud clouding the water, there is no pollution from boaters or waste facilities, and there is no evaporation of the water supply by the sun which all may exist on surface reservoirs.

To tap into an underground aquifer, a well is dug until it reaches they reach the top layer of the aquifer, also known as the "water table". The water table is not exactly flat as one might think. It does have some peaks and valleys that mirror the shape of the land above it. When a great deal of water is pumped up from an aquifer, or even when there is an extended dry spell, the water table sinks lower. This may or may not have much impact on the total volume of the aquifer, depending on its true size.

Beginning as rainfall, water will flow into recharge areas- which is land covered with soil and trees. This will consantly refill the aquifer. Additionally bogs, swamps and underground streams can all can absorb, store and pass on water that might later seep into aquifers. It is therefore very important for an aquifer to be sufficiently protected as seepage can contaminate the source over time. Fiji exists so far away from most of the major pollution causing industrial countries that its underground aquifers hold some of the most pure water found anywhere in the world.

Only one percent of the world’s water supply is fresh water. It flows through rivers, lakes, and underground streams and much of that has already been polluted by humans. That is why aquifers and springs - natural sources of clean water - are so important. That is also why Aqua Pacific® Natural Mineral Water is the best choice to ensure you good  health with a pure water source of the highest quality.